THE FAMILY OF 18-YEAR-OLD TYRESE WEST RELEASE PHOTOS OF TYRESE SHOT TWICE IN THE HEAD EXECUTION STYLE BY POLICE.

The family of 18-year-old Tyrese West, the teenager shot and killed by a Mount Pleasant Police officer on June 15, is seeking evidence in West’s death. West’s body was released to the family, and that West’s body has multiple gunshot wounds, including two to the head.

At about 1:35 a.m. on June 15, West was riding his bike in the 2500 block of Racine Street (Highway 32) when Mount Pleasant Police officer Eric Giese attempted to stop him while riding a bicycle without headlights. The incident ended with West being fatally shot.

Although several media outlets have reported that West fired a gun at police, no law enforcement officials have made that claim. No information has been provided that indicates West was involved in any criminal behavior on the night of his death.

It remains unclear if the officer involved was wearing a body camera, which under the Mount Pleasant Police Department’s policy is encouraged but is optional at officers’ discretion.

West, who was on a bicycle, fled on foot from the officer. After a short foot pursuit, the officer claim he used ”Less-lethal” attempts to address the threat of a ”alleged” weapon which were unsuccessful, and commands issued to West were ignored. That is when, police say, lethal force was used to address the ”Alleged” threat of the uncooperative individual.” 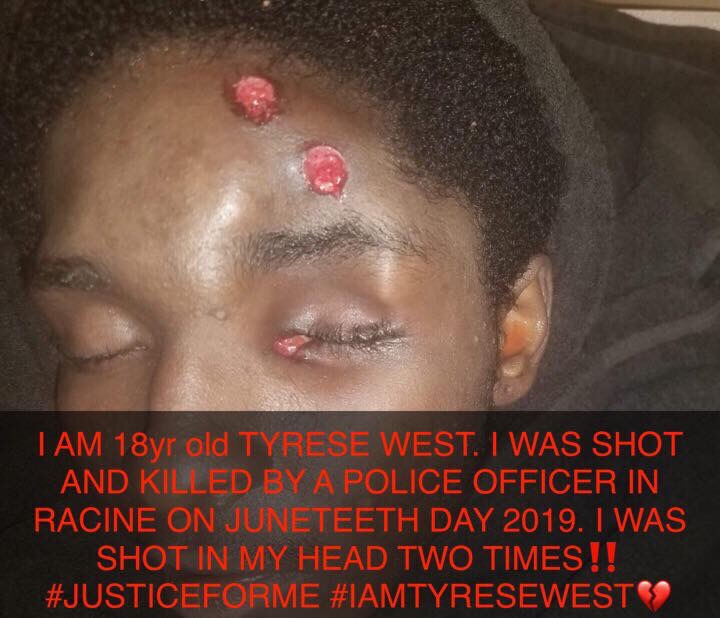 The officer also says he used life saving measures after he shot Tyrese West execution style in the head. The officers whole story sounds fishy. Since the shooting several families have come forward, and have posted stories of unlawful behavior committed on their loved ones by officer Eric Giese. There is even circuit court documents that have been posted online exposing the officers past of unlawful behavior against citzens.

10 thoughts on “THE FAMILY OF 18-YEAR-OLD TYRESE WEST RELEASE PHOTOS OF TYRESE SHOT TWICE IN THE HEAD EXECUTION STYLE BY POLICE.”